Let’s look at the situation for what it is: There is no economic growth in the United States barring the government’s relentless support. If not for the massive 50 per cent surge in government expenditure in 2020 (putting LBJ to shame with his 40-per-cent blowoff in 1968), nominal GDP would have collapsed 16.2 per cent instead of contracting 2.3 per cent to its lowest level in six years. This should put any recovery into perspective.

But then look at Canada. I have no clue what the Bank of Canada is looking at. The local economy is on life support, with only ongoing government stimulus and the red-hot housing market as sources of any vitality.

First, as with the U.S., strip out government handouts in 2020 and the economy would have sunk 15.3 per cent to its lowest level of activity in seven years. At the same time, the Canadian housing market has gone simply insane with ultra-low interest rates, easy access to credit, shifting preferences (work from home) toward more real estate and tremendous speculation. Total residential construction has surged 22.5 per cent in the past year and that has taken the housing share of GDP to a record high of 9.3 per cent — double the historical norm. Strip out housing, and GDP contracted 3.5 per cent in the past year (versus the actual decline of 1.5 per cent); strip out housing and government, and the economic contraction is -5.6 per cent.

In the manufacturing area, wood product sales have ballooned 69.5 per cent year over year. The rest of the sector is -4.1 per cent. That’s the story. Same with industrial production, where wood products, yet again, are up a resounding 21 per cent year over year and the rest of the factory sector is down 2.2 per cent. We have a situation where housing starts, at a record 335,000 in March, were up an incredible 72 per cent from year-ago levels. Housing and government. That’s the Canadian turnaround story.

As for Canadian household income, well, without the massive government transfer of borrowed money, that income would have collapsed 9.8 per cent in 2020 (-5.6 per cent on a Q4/Q4 basis). All on the back of an unprecedented 51.5 per cent surge in transfer income from the government sector.

Now there is also something going on with Canadian employment data, because a big gap has opened up between the Labour Force Survey (LFS) and the Survey of Employment, Payrolls and Hours (SEPH). As of January (for apples-to-apples comparisons), the former was running at -4.4 per cent year over year and the latter was at -7.3 per cent. For all we know, if the SEPH is right, the real unemployment rate is still closer to eight per cent or higher than the posted 7.5 per cent. Strip out government employees and construction workers, and employment in Canada is running at a -8.1-per-cent year-over-year pace (without construction alone, the trend is -7.7 per cent).

This is what has the Bank of Canada enthused right now? One has to wonder what happens to the Canadian economy when the housing bubble finally does pop, the stimulus programs abate, and the commodity cycle runs its course. What is left? The reopening of the economy? I have news for you: If the real estate gravy train ever does end, considering the outsized impact it has exerted on the economy, there is no reopening large enough to offset the housing reversal and all the negative multiplier effects that will reverberate across the entire economy.

The same holds true in the U.S., where growth has also been dominated by the surge in the housing sector, though the bubble in real economic terms and in price terms looks to be more acute north of the border. 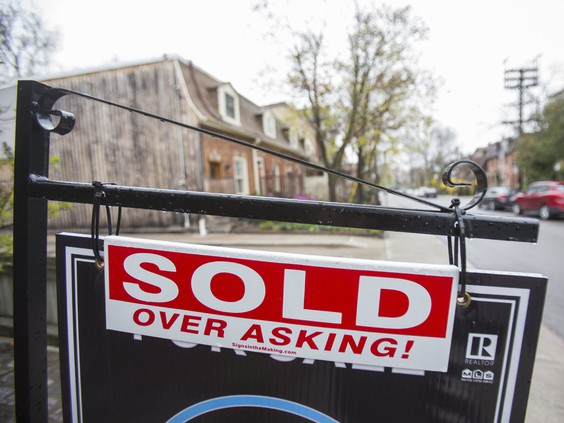 Looking for the black swan? It’s the housing mania. And when it breaks, all the inflation chatter will be making its way from the front pages to the back pages of the morning papers. And the odds of a huge bull flattener in Treasuries will replace the bear steepener, which, until very recently, was the dominant market theme, along with the correlation to the cyclical-value-over-defensive-growth trade in the equity market, because that, too, will unwind.